Maps of the trails on Vashon Island

The single-track trails in center of Vashon the are now signed and many are re-named. Some of the original names are now official like Techmo.

King County Parks now owns and maintains the trails.
Below (left) is a picture of the new sign at the parking lot off of SW 188th (aka Goat Road). Image at right is the official map.
Scroll down for my original map I drew when I worked at The Bike Shop out on Cemetary Road. The shop was later moved to town and re-named Vashon Island Bicycles. Click maps for larger images. 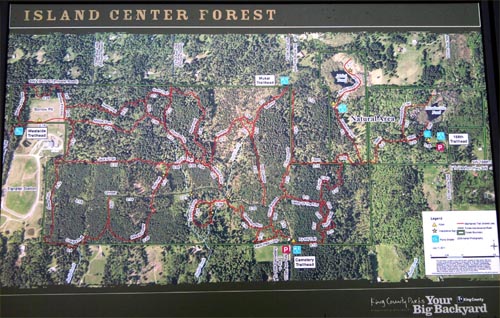 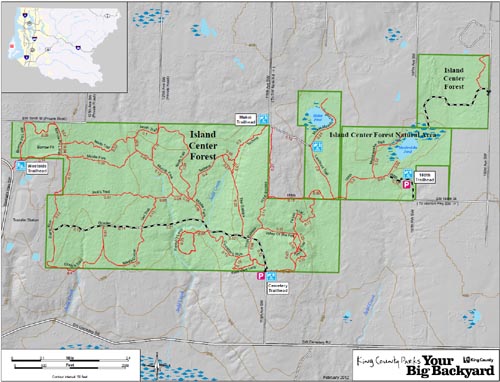 Directions to trailhead: When you get to the town of Vashon, almost exactly 5 miles from the Fauntleroy ferry, turn right on SW 178th Street (one block past the traffic light at Bank Road). Head due east about 1000 feet and turn left on 101st PL SW. Travel south past the street barricade until you reach the trailhead on your right: 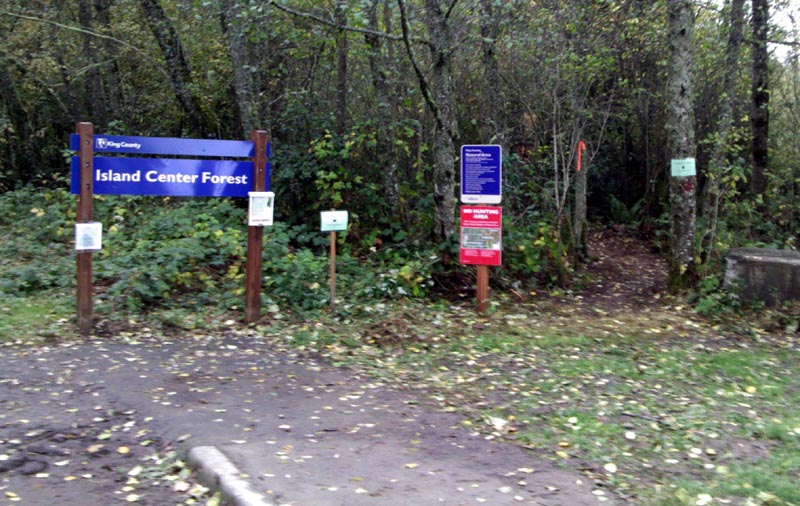 Update Fall 2001:These trails are well used and well maintained. Thank any Horsey People you may see! From the bog near Red Car east, the trails have all been bulldozed. They are wide sweeping paths that are quite ugly. There may be a development going in there. There are No Trespassing signs so stay on the trail. The area around Gazelle and Yellow Post trails has been developed. The trails there do not go thru anymore. There are really huge houses there now. Please respect the private property. There is a nice new trail bypassing the mud bog. The red car is gone but there is a new red car in Kansas near the ditch. 3 dogs is an awsome trail now! The logging area is developed and there is a house there now. There is a new trail from Techmo to Rocky Horror.

The trails have drastically changed over the years. The area east of the big mud bog SUCKS! ORVs have turned it into wide open multi-track. Also many No Trespassing signs are up. Scroll down for my updated 2001 map. I am working on a better edition. Keep a look out soon. If you ride these trails and have input or a good name for a trail, let me know. The GREATEST, HARDEST, COOLEST, MOST TECHNICAL trail here is Rolling Rock! Check it out!

Below is a map that someone simplified and posted on DirtWorld.com

Below is a locator map of the trails above: